Teens only become more aggressive as a result of exposure to violent games and television programmes when they are also exposed to aggression in their social environment, such as conflict in their family or aggressive behaviour among friends. This means that most parents need not directly worry about negative effects of media violence on their children’s behaviour. This is one of the findings from Karin Fikkers' doctoral research. Fikkers will defend her dissertation on Thursday, February 25 at the University of Amsterdam.

In society as well as in academia, the effects of media violence on aggression are passionately debated. Violent media content regularly sparks controversy, such as the many explicit scenes in the popular series ‘Game of Thrones’ or the controversial mission in ‘Call of Duty: Modern Warfare 2’, in which a player witnesses an attack on innocent civilians. Some people see a direct link between such media violence and aggression in the real world, while others think media violence exposure does not play a role in such behaviour.

‘Effects of media violence are often seen as an all-or-nothing phenomenon’, says Fikkers. ‘Violent games and TV programs either increase children’s aggressive behaviour – or they don’t. But this implicitly assumes that media influence all children in the same way. My dissertation shows that most teens don’t become more aggressive as a result of media violence exposure because of their social environment. For example, for adolescents growing up in a loving family or in an environment that rejects aggression, media violence is not related to increased aggression. Only when adolescents experience substantial aggression among friends or conflict in their family did we find that media violence and aggression were related.’

Good examples. In some cases, the effect was even the reverse. ‘Teens growing up in positive social environments actually exhibited less aggressive behaviour as a result of media violence exposure’, Fikkers notes. ‘This is an interesting finding that has not been found before. Perhaps these teens strongly receive the “correct example” from their social environment, making them less motivated to adopt aggressive behaviour as seen in entertainment media.’ 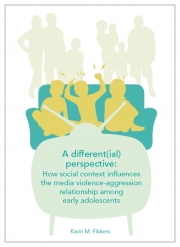 Teens also reported how often they behaved aggressively and how often they perceived conflict in their family and aggressive behaviour among their peers. By measuring these behaviours at two time points, Fikkers was able to see whether media violence was related to a change in aggression and for which teens this was most pronounced.

Apart from their social context, teens’ temperament and developmental level can also influence media effects. In addition, such effects can also depend on the type of violent content children see on television or in games. In the next years, Fikkers and her colleagues from the Center for Research on Children, Adolescents and the Media (CcaM) will therefore continue working towards a more balanced understanding of the effects of media violence.

Congratulations, Karin, on your fine achievement!